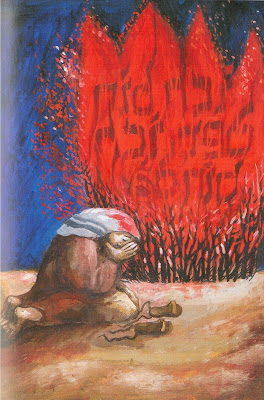 THE PRIVILEGE
AND
JOY OF SERVING

In the last Mercy House update, in his reflection, Father Jeremias referred to our benefactors and co-workers, stating that: “Out of their poverty or abundance, they reveal to others the face of the only true and Good Samaritan, Jesus Christ.”  It is a mind-boggling reality that, in reaching out to help others, we really DO reveal to them the Face of God: “We are the earthenware vessels that carry this treasure.”  (St Paul)  It works the other way too: we experience the presence of God through others who help us or receive our help.   There is no doubt at all that our lives as Christians are a matter of “Living the Divine.” (This is the title of a small booklet of reflections we have compiled for our benefactors and viewers, available free of charge). The artwork shown here, by Sieger Koder, imparts to us Moses’ immense sense of unworthiness, when being called and confronted with the Divine. We do not see the burning bush, but find the face of God in others, and others find it in and through us.

On 24 September, we held a Mercy House Information morning to show benefactors and interested persons what we are about.  On that occasion, one of the our new co-workers, Nigerian, Stella, gave a  moving speech on how she had found her way to Mercy House and what it had meant in  her life. Father Jeremias recently wrote an article entitled, THE FACES OF GOD, in which he referred to this moving speech, and this is what he had to say:
“Stella met Diana (co-ordinator of the Mercy work), one Saturday morning, and asked her if she could give her a job.  Diana replied that she did not have a job for her, since everyone who works at Mercy House is a volunteer.  Stella was nonetheless interested and asked Diana what we do at Mercy House. The reply was: ‘Come and see….’  Stella did go and see, and, on seeing what is happening there, after a short time of reflection, offered her services there on the volunteer basis. Stella has been teaching English to newcomers and has helped with home schooling, to prepare new children for school. Soon her heart was won over. She says that she now sees them as, not only her students, but as her own children: ‘I am now not only a teacher, but have become a mother.’  Here God reveals himself as a young and beautiful God, because Stella is exactly this.”
In our last update we introduced the 4 new children from the DRC whose parents and entire extended family were killed in an explosion beside their house in Congo.  Since then, on 9 August, we were privileged to take into our care young Danny from Goma in the eastern DRC. On 21 June this year, he was awoken from his sleep by gun shots in his own home. Soldiers had come and, terrified, he hid under his bed.  This saved his life, since, although they came into his room, they did not look under the bed.   When they had gone, he went through to the lounge where the rest of the family had been watching TV: everyone was dead, lying there in pools of blood.  He fled hastily to his aunt’s house. Shortly after arriving there, soldiers reached her home as well. He saw them beating his uncle to death and even raping some women present.  In spite of all this, Danny has turned out to be a ray of sunshine at Mercy House. We even got him into school, and he is very happy about that. See photos below. 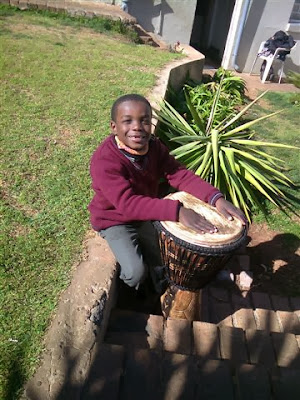 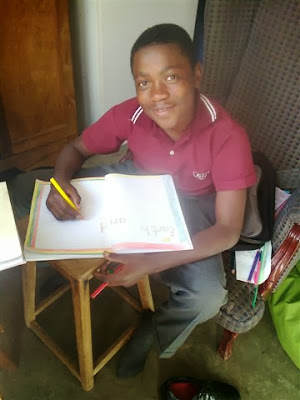 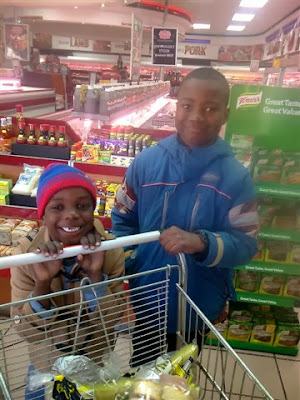 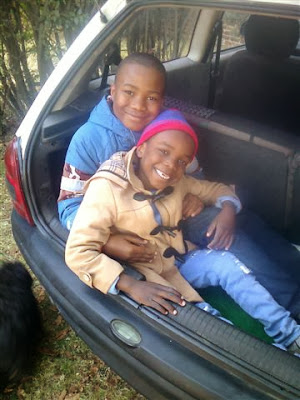 We see the “Face of God” in these children.  Can you?

This took place at Koinonia on 24 September this year.  Around 50 guests attended, and we thank them all for coming.  We started with the Eucharist presided over by Fr. Jeremias. All the participants got actively involved.  This was followed by tea, then an hour of information. During this time, we heard an excellent speech by Angolan Dr Martin Kalenga, whom we assisted to get through a Medical degree. The details of his struggle to realise his dream were most touching.  He was followed by short speeches by new co-workers Stella Ozoani and George Potgieter, who explained how they got involved with Mercy House and what it has meant to them. The Mercy House children then sang to songs to the accompaniment of guitarist, Brian Gallagher, and then certificates were presented to long-term supporters. Lunch concluded the day. A few photos of the event are given below,
NEW CO-WORKER: GEORGE POTGIETER
We are grateful and happy to welcome to our Mercy Team our new co-worker, Mr George Potgieter.  In complete contrast to the saying: “Too little too late,” of George we can really say: “So much so soon.”  George has embraced our work with his heart and has already done a great deal to help our refugees and Mercy House itself. We thank him for this and look forward to an exciting future of working together. He is seen in the photo above at the luncheon with his wife, Hettie, whom we also welcome to our Mercy work. 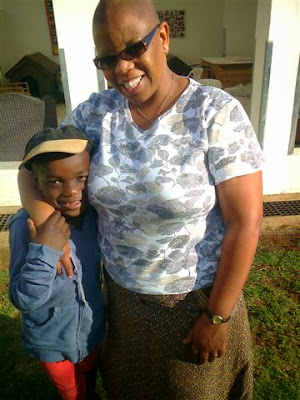 Sister Clementine of the Holy Family Sisters has joined our small group of co-workers. She is very welcome. Currently she is giving classes for First Communion to some of our youngsters, including Manasse (call me BK) who is with her in the photo below.  BK was orphaned recently when his parents were killed in an explosion in Congo. 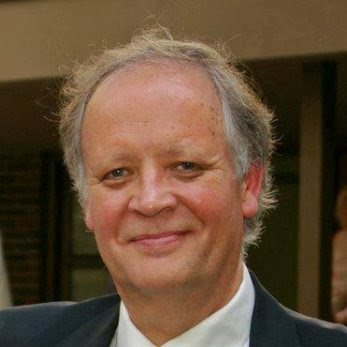 Neels is a lawyer who has assisted several refugees with tremendous dedication with legal issues. We are immensely grateful to him.

We invite any viewers and interested persons, to join us on Monday, 16 December, public holiday, at 10.30 a.m, for Holy Mass at Mercy House, 82 North Avenue, Bez Valley, followed by refreshments and on Thursday, 19 December, for our annual Picnic-at-the-Park, which includes a marathon around the park and shorter races for the children.
Christmas at Mercy House is always a unique and beautiful experience with kids getting gifts and Father Christmas arriving in person to distribute them – it’s always open house.