2012-01-14
HOLIDAY FUN
Lucky Boys
The Christmas holiday started at the beginning of December and ours was full of fun.
Moise and Zeng, are seen here visiting their favourite horse, Beauty, who lives at the Spruit in Hyde Park.
The same two lucky boys, thanks to  Mrs Rosemary Benjamin, were able to spend a week right beside the sea in Plettenberg Bay, where they visited the beach daily, visited the elephant park, had elephant rides, visited the monkey sanctuary, had a motor boat ride and so much more.  It was one of those holidays that they certainly will not forget. Thank you Rosemary…
SHADADI VISITS HIS FAMILY
Shadadi was placed Mercy House as an “orphan from Burundi” by the UNHCR in the year 2001. 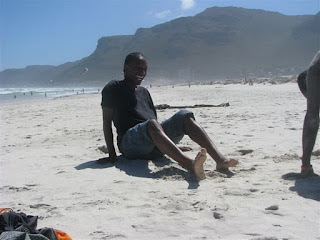 After much prayer and a search of 9 years his family was traced. He was able to go down to visit his re-found family during December in Cape Town. Currently he is studying at Wits Medical School.

DIBABA BREEZED IN FROM THE UK! 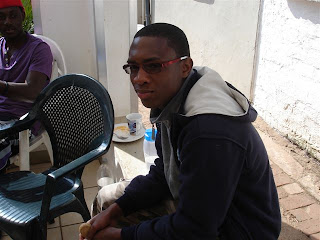 To the great joy of everyone, our beloved Dibaba, who is on a Richard Branson Bursary at Stowe School in the UK, was given the opportunity by his sponsor to come home for Christmas for 3 weeks and escape the cold European Winter!  Dibaba is always a breath of fresh air and he was so happy to be home again.  Wearing the same beautiful smile, he left us to continue his studies on 3 January. Go well Dibaba.

MAKING THE PLACE BEAUTIFUL FOR CHRISTMAS

It was Bertraud, seen in the photo,and Fabi, who offered to repaint Mercy House in December.

Zeng, seen mowing the lawn, and several others, joined in making our house “Something Beautiful for God,” before Christmas. 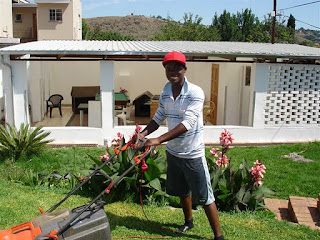 Every year the St Vincent de Paul Society of Bez Valley gives Mercy House a holiday braai. They also support us substantially throughout the year. We are greatly indebted and indeed very grateful to them for their loyal support. 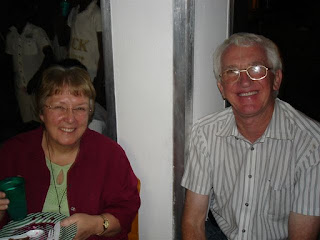 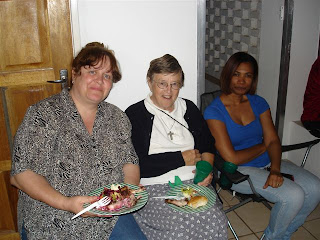 The 2 photos above show their members enjoying the evening with us, Mr Gus Wilcox (in the photo) being their leader. Thank you S v de P.
SURPRISE CHRISTMAS MEAL
On 8 December, an advertising company called Volcano, gave us a most superb Christmas meal. A team of about 8 of the employees came down in the morning and worked all day into transforming our play centre into a beautiful Christmas scene.  A delicious meal was served and of course Father Christmas arrived with a gift for everyone present, with their names on. We say a very big and sincere thank you to them all for their hard work and love and to the company for the lavish celebration… 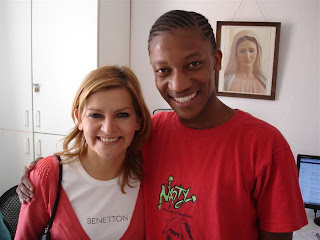 Polish Kasia Wawiernia, who worked as a volunteer at Mercy House from 2000 to 2004 and who now works for the United Nations in Guinea Bussau, paid us a short visit and is seen here in the picture with Shadadi, whom she knew a as a small boy and who is now taller than her! 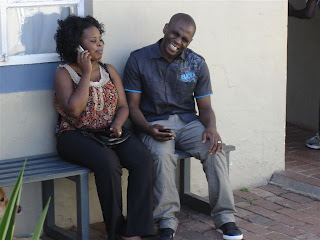 It was with great joy that we welcomed Emmanuel back to Johannesburg on 15 December. Emmanuel is an integral part of our Mercy House family, having lived with us for some time until his marriage last April. He designs and maintains our website and, together with Mr Attilio Dalvit and Michael Holding, maintains our computer room and internet. Emmanuel is now setting up his own business in Johannesburg and is seen here with his wife Natalie soon after his arrival. 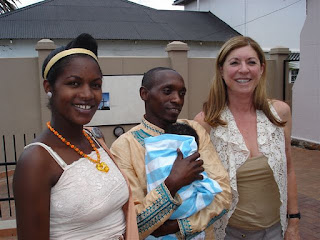 The above photo shows Mari Bernard with her husband Festus, at the baptism of their new baby, together with Mrs Rosemary Benjamin who has been a great support to them.

A  BEAUTIFUL AND WELL-EARNED CELEBRATION 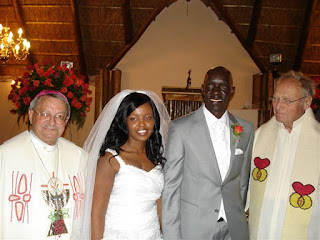 We were happy to share in the joyful celebration of the wedding of DR Emmanuel Taban and his beautiful wife during the holiday season. Emmanuel came to Mercy House as a young boy in the mid – nineties and, with Father Henry of the  Combonis, we  were able to get him into Jeppe Boys High School, where he did his matric. From there, with the help our Comboni Missionary Fathers, he was able to do a medical degree at Medunsa, and this past year, qualified as a heart and lung specialist.  Having been captured by Muslim extremists as a schoolboy in Sudan, indoctrinated in the Muslim faith, even having to change his name, having had to escape and flee down Africa as a young boy alone – yes, it’s all true – the struggles of his life have only produced the best in him: his incredible determination to get to his goals has been relentless. 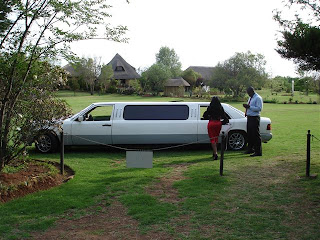 He deserves the rewards he has got, including his lovely wife. Emmanuel, we are proud of you and wish you all the good that you certainly deserve.

CHRISTMAS CELEBRATION
A huge debt of gratitude is owed to Rosebank Union Church, Investec and our School Sandwich Circle Ladies for the costly and beautiful gifts which all received at our Christmas celebration. 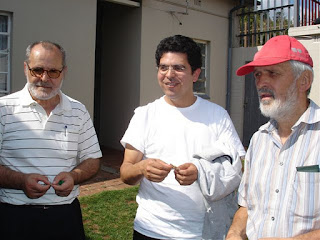 Likewise, huge thanks to Mrs Anna Picrakkos of Benoni for donating a large amount of chickens, cold drinks and bread rolls for our lunch. St Vincent de Paul of Victory Park also supplied a lot of food. 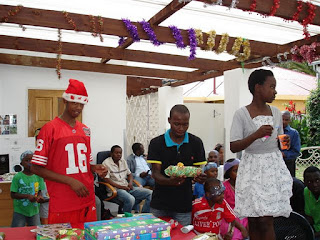 The photo shows the gifts being given out and Inez on the chair blowing the bubbles that each recipient was supposed to catch before getting the gift! Comboni Fathers Jeremiah and James as also Brother Eric are seen sharing in our joy on Christmas day.
WE ENDED OUR YEAR UNDER THE SIGN OF THE CROSS
It was a shock beyond telling for everyone to receive the news, shortly before midnight on the 31st December that our beloved Fabi had passed away in the early evening of that day. 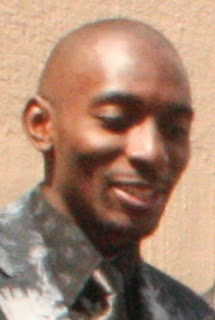 Fabi, together with his younger brother, Danny, and sister, was an orphan from the DRC.   The 2 brothers have lived at Mercy House for some time, being completely part of our Mercy House family.  Fabi had gone to stay with his sister in Germiston in early December and his brother, Danny, also went there over the holiday period. So, providentially, Fabi ended up spending the last month of his life with his closest family, though no one would ever have imagined what was going to happen. 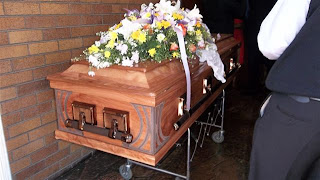 Fabi was still so young. His death came very suddenly. He had even gone on foot to take a taxi to the hospital that morning. It has been found out that Fabi had sickle cell anemia and needed a blood transfusion urgently. Unfortunately it did not reach him in time. A terrible, terrible loss and blow to us all. We will never forget him. 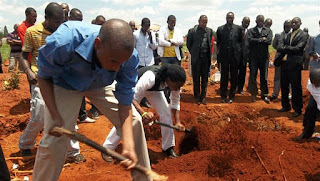 May he rest in peace and intercede for our Mercy House family from his place in heaven.