2010-02-22
Father John (Left) and Richard Right) holding the farewell gifts we had prepared for them at our farewell celebration on 21 February. 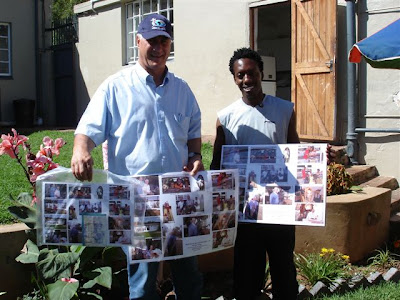 It is always hard to say goodbye to someone greatly loved, and this time it was goodbye to one of our “greats.” Father John Converset of the Comboni Missionaries, has been with us since 2001, giving ever increasing support to our Mercy work. Apart from his guidance, practical help and general backup, he was instrumental in accessing funding for our Play Centre, which has become a great source of joy, relaxation, friendship and healing.
On Sunday 21 February we had a “braai” lunch and celebration to thank Father John for all he has done for us and to bid him farewell. 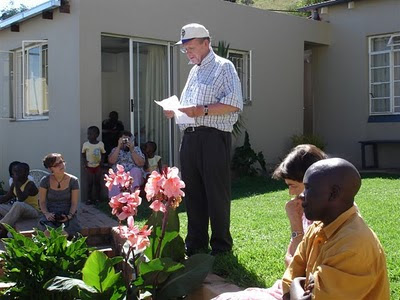 In the photo Mr Peter Holding, our accountant and member of our management team, is giving a farewell speech. In the background on the left is Anja, our young German volunteer who will also be leaving us soon – so quite a few goodbyes seem to be on our current agenda! 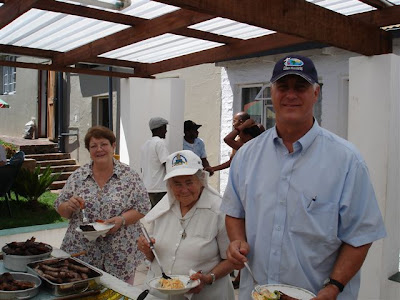 Ms Tish Holding, Sister Fidelis and Father John, all of our management team, about to enjoy the lovely lunch provided mainly by Tish and Peter HOlding, at our farewell for Father John.
Sister Fidelis’ Diamond Jubilee

Well, her surname is Diamond, and she certainly is one of the jewels in our Mercy House crown. She made it to her diamond jubilee too: On 6 February Sister celebrated the 60th anniversary of her religious profession with a Mass and luncheon.  Father John concelebrated at the Holy Mass and a Mercy House contingent attended. In the photo we see two young refugee priests 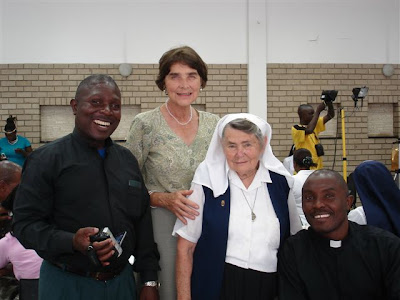 Father Robert on the left and Father Paulin on the right- who were assisted by  Sister when they first arrived, together with Sister and Diana on the very happy occasion.
FAREWELL TO RICHARD -ATLEAST FOR THIS YEAR
Well, like Samson, he has cut his long locks by now and has temporarily left Mercy House for distant KZN, to do a year’s practical which is necessary as a third year in his studies for a degree in Mechanical Engineering.
We bade farewell to him on Sunday 21 February on the same occasion as we said goodbye to our beloved Father John.  We will miss Richard greatly but he will be back: no one likes to leave Mercy House that we know….. 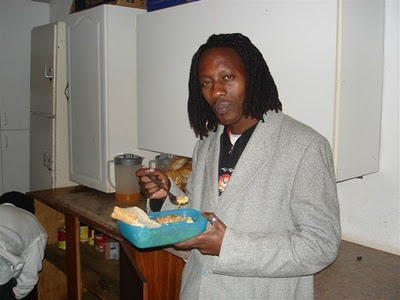 As an aside, in this photo Richard was wearing one of the jackets sent out from St Richards by Ms Judy McGregor to Mercy House last year.  Smart boy was feeling good in his classy attire! 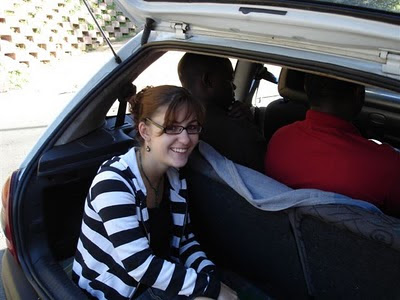 Anja, our young volunteer from , in the boot of Diana’s car.  We were on our way to Mass and could not fit in all the hopeful travellers, so Anja found the solution and seemed quite happy there – as she said: Far more room in there than being squashed up in the back of the car! 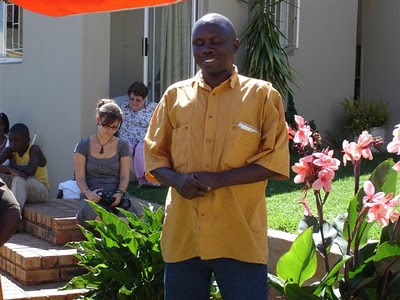 Donatien gave a farewell speech on behalf of the refugees at Father John’s farewell. He is currently a 2nd year nursing student.